This should be easy. Get up, pack bikes, ride, eat, sleep. Repeat.

We’ve been away for just more than a week, and it’s definitely an adjustment, getting used to travelling, and moving by motorbike. Not complaining, we are in a very privileged position to be able to go on this trip together, but, I did think it would be easier!

The trip is still a little in limbo. Less limbo than a few days ago, but still a bit in question. Problem is me, or my noggin, or the ears on either side of my noggin. Turbulence, be damned. I have found the noise of the wind hitting me to be a bit challenging in regards to the intensity/volume, and duration. I do experience a bit of tinnitus, but I’m not really liking the idea adding hearing loss to the mix.

We had spent a lot of time preparing bikes, gear, and route for this trip. The one thing we weren’t able to do, was go on any extended rides to really iron out the bugs. I guess that’s what the travelling is for. So, with that in mind, we went with what we knew, and 95% has worked. The last five per cent for me, was my helmet, and the turbulence. One mistake was removing the visor right before we left. I did this, because I was very concerned about the noise and wind buffeting from having a helmet with a visor. I thought that by removing the visor, it would reduce the buffeting, and turbulence.

I have found that in the first couple of days that my ears were ringing after hours of 100+km/r riding. The hearing loss isn’t something I’m prepared to accept, and Lars doesn’t expect me to either.

This kind of put us in a difficult situation. We were only three days into the trip, and not very far from home. The reality of turning around not continuing was very real. We were both pretty quiet for a couple of days. We stayed in Florence Oregon, at a lovely place, The Landmark Hotel; we made some calls and planned to go to Eugene, to the Cycle Gear store. They confirmed they had a good selection of helmets, so off we went. The ride was pleasant, but cold, and wet.

At Cycle Gear in Eugene, (Shout out to Ryan, he was very awesome and super helpful!)  I did replace the Shoei DS Hornet with a Shoei GT Air, and some big cost. Then I shipped the beast back home, another big cost. That definitely has improved things, but still, it’s not quite perfect. Right now, we’re staying in Windsor California, at an AirBnB, waiting for a windshield spoiler to arrive from Revzilla. Tomorrow, we’ll receive and install, and the next day we’ll head out on the road.

This has caused a bit of turbulence between us too. Lars has been frustrated with the delays, of my g-ear issues, and the weather has also slowed us down. Moreso, Lars has been planning this trip for a couple of years, and my participation was confirmed in September of last year so not much time to anticipate the impact of extended highway riding for me; Hopefully, optimistically, the wind deflector will work. We aren’t really considering what the options are if it doesn’t.

As far as the riding goes, the first couple of days of riding were cold, and wet. Five to eight degress celsius, and rain. Not exactly comfortable riding weather. Thank goodness for heated gear and heated grips.

We have been travelling on Highway 101 for the most part, and it is beautiful. Ocean Shores, Lincoln City Oregon, over to the coast to Highway 1 in California. From Westport down to highway 128, through the Redwood forests. I thought trees in British Columbia were big, na-a! It’s just stunning scenery here.

We haven’t taken too many pics so far. The reality is that it’s been quite cold, and it’s such a big hassle to stop, take off gloves, find the camera or phone, and then snap some pics. Gear back up again… Sorry…

Here are our pics so far: 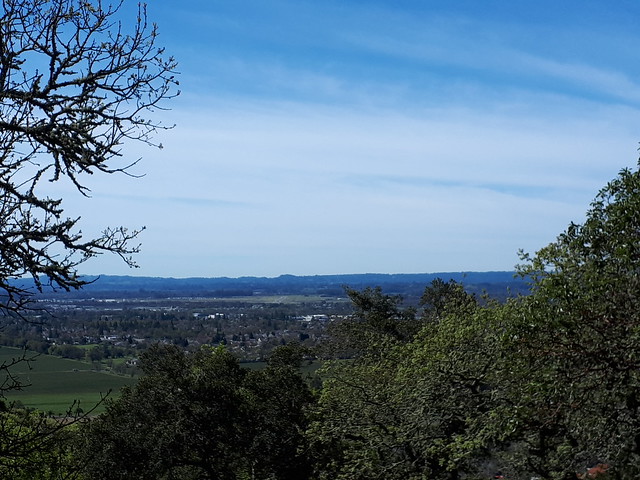 So, we’re both cautiously optimistic, that we’ll continue down to Mississippi. In the next few days were travelling south through San Francisco, Santa Cruz, then across California to Bakersfield and up to Death Valley by the end of the weekend. We hope to bask in the sun, and avoid slithery things that rattle….

For you bike nerds out there, here’s a thing or two I’ve learned about turbulence, in trying to figure out what’s gone right and wrong.

I thought for sure it was the mirrors that was causing the turbulence. Tried removing them, and it didn’t make a difference. That’s great, and not great, because along the way, I picked up some short little screw on mirrors in desperation. Now, what the heck do I do with those…

Then we removed the windscreen, and bingo, that was it. So, for me, a 5’1” rider, with a not tall torso, the screen I have was causing the air to hit me right at the head level.

I’m getting this: Spoiler blade to attach to my windscreen. Fingers xx-ed peeps!

As we were riding the other day, with the new helmet and no windscreen, we were travelling about 100kms/hr, on an open stretch of freeway. I was to the right of Lars about five metres back. Super quiet, and very enjoyable. Then, I tracked behind him and the turbulence was back. Sagging off probably 30+metres would negate it, but any closer and I was back in noise-ville. I wish I figured that out last week.

So, that’s the first post from the road. Would love to hear your feedback!